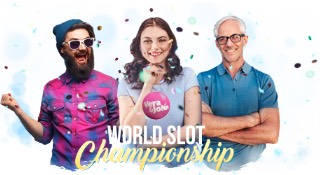 November will be an exciting month over at Vera&John Casino! From the 1st to 28th, a series of daily tournaments will run – and the winners of those will be invited to the Grand Finale! What they´re calling it? The World Slot Championship.

How does it work?

The daily tournaments will run from 1st until 28th November, and players will have to wager with real money to qualify. There will each day be a highlighted game to play, that will earn you points for the leaderboard. The top 5 players each day will be chosen based on the highest consecutive pay factor – meaning that even low betting players has a chance to win! The daily prize pool is a £1900 prize pool that will be shared between the top five players, and they will get one ticket to the Grand Finale each!

The Grand Finale will be held on th 30th November – and is an invite-only tournament, only open for players that has been in the top 5 one day during the promotion. All in all, 140 players will join in on the final. All players that has qualified to the Grand Finale will get Free Spins on a chosen game – and the five players to score the highest win on one single spin will take home the top prizes!

So, what are the prizes? Nothing less than £50,000. The top five players in the final will share the cash – will you be one of them?

Head over to Vera&John and join the Championship now ->