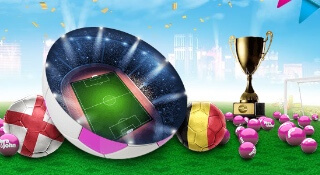 The 2018 World Cup is around the corner, and you’re probably just as excited as they are over at Vera&John Casino. But get ready to be even more excited – because they’re giving away the chance to watch England play Belgium in June!

World Cup Wins at Vera&John Casino will work like this: There will be one tournament every week, each with its own £2000 bonus prize pool that will be split between the top 70 players. The players placed in the top 10 will get an invitation to the World Cup Wins final in April – and the chance to win a trip to see England play in the 2018 World Cup!

Four weeks of chances to win

You don’t want to watch this from the sidelines, so make sure to get in on the action! This week is the first one of tournaments, and it will run until Saturday 10th March at 10:00. During this week, you can play the selected slots in order to collect points for a leaderboard. You’ll earn one point for every £1,00 real money wager played on the qualifying games.

There will be a total of four tournaments that will span over four weeks. The players that are placed in the top 10 in the different tournaments will go head to head in the final. The final will kick off on the 4th April, and one lucky winner will land tickets to the England vs Belgium match this July!