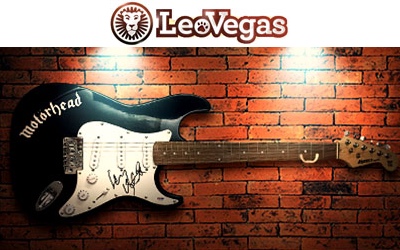 The new slot Motörhead is here! LeoVegas celebrates the new rock slot with an awesome campaign giving you the chance to compete for a guitar signed by the Motörhead singer Lemmy.

LeoVegas will also run a slot tournament each week until oktober 24th where you can win cash prizes and free spins. Continue reading to learn more about the celebration of the new slot!

Win a guitar signed by Lemmy

If you want to compete for the guitar signed by Lemmy Kilmister you should play at the new rock slot to gain tickets to the prize draw. Every £10 you deposit and plays with gives you one ticket. Until the 24th October you can earn tickets to the lottery.

Weekly tournaments with £5000 in first prizes

Each week until the 24th October LeoVegas will arrange a slot tournament at the slots Guns N’Roses, Jimi Hendrix and Motörhead. The first prize in the tournaments is impressive £5000. In total £100 000 in prizes will be handled out during this campaign.

Here are the dates for the tournaments:

Learn more about the campaign at LeoVegas