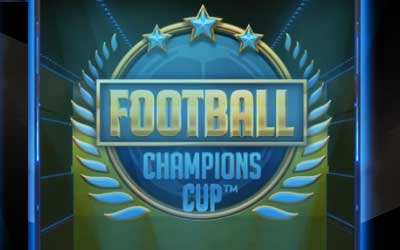 It can hardly have escaped any of you players that there is a European Championship in football going on. But right now it’s a few days break in anticipation of the grand finale between Portugal and France.

If you suffer from football abstinence during this pause you might find the slot Football Champions Cup Interesting! The slot is created by NetEnt and was released in May. You can win up to 210 350 coins at the slot if you’re lucky.

Football Champions Cup is a fun slot with two bonus features. One of them is randomly activated and transforms some of the symbols on the reels to wild symbols. The other one is a bonus game where you shall try to score and save penalty kicks. Try it, it’s really fun!

In the slot you also have the chance to win free spins. If you spin three scatter symbols which in this slot is the golden cup. You can win as much as five free spins. During the free spins mode you shall hope for wilds in the colour of the nation team you have chosen. Because if you get more wilds than your opponent you proceed to the quarter final and get more free spins! As you can understand, the free spins round is formed like a football tournament where you can spin your way to the finals.